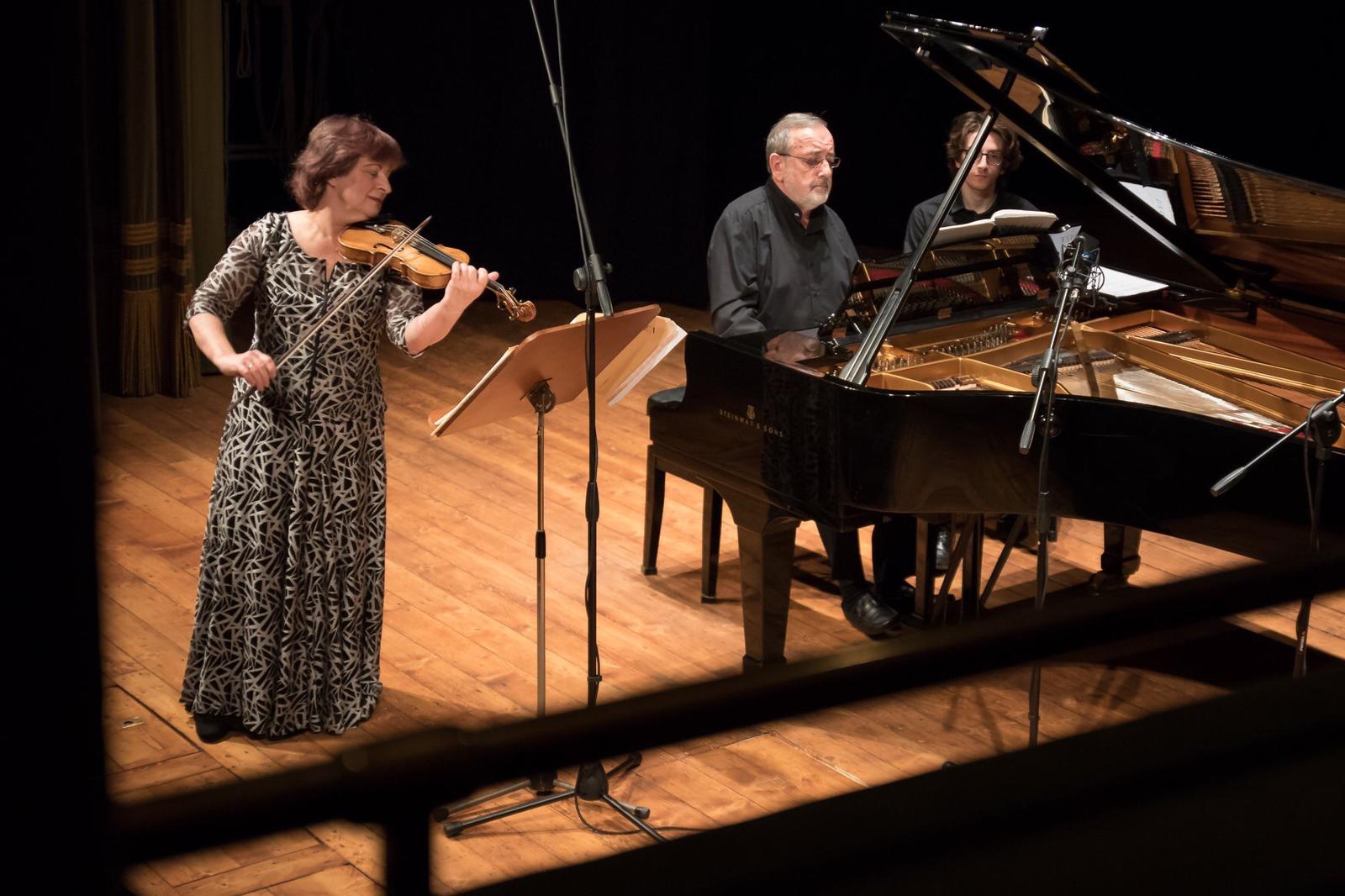 Born in St. Petersburg, Russia, Vera Vaidman studied in Moscow — first at the Central High School of Music and later at the Tchaikovsky Conservatory. Her major teachers were Boris Belenky and David Oistrakh.

Immediately upon arriving in Israel, she took part in Isaac Stern’s master courses at the Jerusalem Music Centre and went on to appear frequently as a soloist with orchestra, recitalist, and chamber music performer. She was heard with the Israel Philharmonic Orchestra, conducted by Zubin Mehta and Andre Kostelanetz, the Israel Chamber Orchestra under Rudolf Barshai, the Jerusalem Symphony, led by Gerard Schwarz, Lukas Foss and other conductors, and with all the other orchestras in the country.

She has toured Europe on numerous occasions as recitalist and soloist with various orchestras, performing, inter alia, the entire Bach violin solo repertoire and the 10 violin sonatas by Beethoven. Performed recitals at the Oxford and Cambridge Universities. On Paul Hindemith’s 100-th birthday, she performed his violin concerto at the Hindemith festival in Stuttgart, Germany; she also appeared as soloist in the Dvorak violin concerto in Concepcion, Chile. Vera Vaidman has given recitals in New York (at the Merkin Hall), Chicago, New Haven, Rochester, N.Y., at the Oberlin, Smith and Dartmouth Colleges, Radford University and Virginia-Tech Institute in Virginia, Ferenc Liszt Academy of Music in Budapest, Music Academy of the Zagreb University, Seoul National University (Korea), as well as the Hong Kong Academy for Performing Arts, and was heard as a soloist with Jerusalem Symphony in the USA. Her Israel-recorded CD has won international critical acclaim. In December 2005 she gave the world premiere of the violin concerto by Alexander-Uriyah Boskovich (written 60 years ago, but its final version never performed before). In 2014, she premiered in Israel (February) and New York (March 26) the transcription for violin solo, by Noam Sivan, of the Liszt B-minor Piano Sonata. Her recording of the Sonata was issued on the Romeo Records label (New York).

Vera Vaidman was a founding member and artistic co-director of the semi-annual chamber music festival in Zichron Ya’acov, Israel. For eight years she was the first violinist of the former H.Gertler string quartet, appearing with that group in the framework of Israel Festival and on tour in France, Spain, England, Belgium and Germany. Vera Vaidman has also served the music director and leader of Ramat Hasharon Camerata women string orchestra.

Since 2007 performs also on viola. During the 2012 – 13 season, presented at the Felicja Blumental Music Center in Tel Aviv the complete works by J. S. Bach for unaccompanied bowed instruments: three sonatas and three partitas for violin as well as six cello suites (on viola). Has performed Bach recitals on both instruments also in Spain, Germany, Finland and Poland.

In March 2018 presented, during two consecutive weekends, the Bach’s complete works for solo bowed instruments on the Bargemusic concert series in New York.

Professor (emeritus) of piano and chamber music, the Buchmann-Mehta School of Music, Tel Aviv University. Served as chairman of piano department and as deputy director of the School.

Born in Vilnius, Lithuania. Studied at the conservatory there (with Jurgis Karnavichius), the Rubin Academy of Music, Tel Aviv University (with Mindru Katz), and the Juilliard School in New York (with Ilona Kabos, Guido Agosti, and Ania Dorfmann), where earned B. Mus., M. Mus., and DMA degrees. Also worked with Aube Tzerko at Aspen Festival.

Appeared as soloist with Israel Philharmonic Orchestra under Leonard Bernstein, Carlo Rizzi, Sidney Harth, and other conductors as well as with all the other orchestras in the country. Was heard in recital in the framework of Israel Festival, at the Metropolitan Museum of Art and the Weill Recital Hall in New York, and in many European cities. In celebration of Schubert’s birth bicentennial, performed the composer’s last three sonatas in Tel Aviv as well as in Denmark, Germany, Finland, and Hungary to enthusiastic reviews. (E.K. performing the Schubert Sonata in A, D.959)

Was co-founder and director of the semi-annual chamber-music festival in Zichron Yaacov, Israel.

Served on the juries of numerous international competitions: Arthur Rubinstein in Tel Aviv; Leeds; Esther Honens in Calgary, Canada; AXA Dublin; Maj Lind in Helsinki, Finland; Cesar Franck Competition in Brussels (as jury president); Tbilisi, Georgia; Paderewski in Bydgoszcz, Poland; Bremen; in USA: Oberlin; Boesendorfer/Schimmel; the AMSA World Piano Competition in Cincinnati (in 2000, as jury chairman); the Rosalyn Tureck International Bach Competition for Young Pianists, New York; the New York Piano Teachers’ Congress competition; Jose Iturbi in Valencia, Spain; Vladimir Horowitz competition and Mykola Lysenko competition in Kiev; Isidor Bajić Memorial in Novi Sad (Serbia); Takamatsu (Japan); the Konzerteum in Greece (2000, 2001, and 2002 jury president); the Senigallia, Pinerolo (Italy), Canberra (Australia), and others. A number of his students have won prizes in international contests and are pursuing illustrious performing and teaching careers the world over. (Among them: two recipients of the Avery Fisher Career Award; two others — winners of the Young Concert Artists International Auditions in New York; several prizewinners in such international competitions as the Queen Elisabeth in Brussels, Beethoven in Bonn, Sydney, Honens in Calgary, and Dublin, among others.)

In June 2015, served on an International Committee for Evaluation of the Music and Musicology Study Programs in Israel, convened by the country’s Council for Higher Education.

His articles on musical subjects have been featured in The New York Times, International Herald Tribune, The Jerusalem Post, Musical Times of London, The Piano Quarterly, the Carnegie Hall Playbill, and other publications. His article appeared in Remembering Horowitz, 125 Pianists Recall a Legend, published by Schirmer Books in New York.